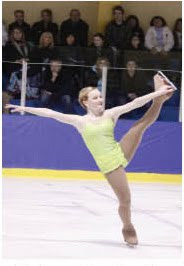 You have all heard the old saying, “Practice Makes Perfect,” Angel Howatt of Petitcodiac has proven that the saying is so. She practices on and off the ice six days a week and sometimes seven. This hard work and determination won Angel Silver overall at the 2010 Skate Canada Skate NB Fall Competition and first for NB. This competition gave Angel a seven point lead over the next NBer going into the next competition for CWG points.
At the 2011 BMO Skate
Canada Skate NB, NS, PEI Sectionals (provincials) Angel won GOLD for NB and finished first overall for the Maritimes. Angel has fifteen points above the next NB skater sealing the deal on making the 2011 Canada Winter Games in February.
Angel also gained her spot on the NB Eastern/Western Challenge Team (PreNovice Nationals) for December 1st competition in Mississauga, Ontario. There will be no ‘taking time off’ for Angel as she continues pursuing her dreams.
Angel loves sports in general and next to skating she loves basketball. She made a very difficult decision this year to not try out for basketball, the game she has played and worked into her off ice times since she was five years old. Angel has given up a lot of things she loves, but she knows she has to keep all her energy and focus on skating in order to pull off the skate she needs to obtain her goals.
Much credit is given to Angel’s coaches, she says, “It wouldn’t have been possible without my coaches, Robert Leger, long time coach and second mom Kathy Grenier and coach and mentor Meaghan McGibbon. They work me hard, keep me motivated, dry my tears at times and give me hugs when it’s needed most. We are definitely a team and with each of them I feel it’s possible. Of course I love and appreciate my family who are always behind me with love and support!”
Angel is hoping to add some new elements to her routine to help get more points. For sure she’ll have a double axle and she’s asked her coaches to put in a triple axle. Angel is always pushing herself, as do all true athletes.
Good luck Angel, all of Petitcodiac will be watching and cheering for you!
Sharon A. Layton-Pollock at 2:15 AM